So having an understanding of the complex and varying nature of the human spinal disc, and the entire spine, let’s take a look at how innovation and technology has evolved and worked through the process of solving this dilemma

SB Charité III, was first developed at the Berlin Charite Clinic and produced in Germany by Waldemar  Link  Gmbh in 1987

Karin Büttner-Janz and Kurt Schellnack, under the supervision of Hartmut Zippel, developed a device now referred to as the SB Charite.  This device had a sliding core design. The first two generations of the device worked well, but real success was had in the 3rd generation.  The SB Charite disc was the first disc to be implanted over 1000 times.  This device receive FDA approval for use in the U.S. in 2004 for single-level surgeries in L4-L5 or L5-S1. By then, the SB Charite was considered obsolete by many surgeons in Europe. Over a 20-year period, more than 30,000 SB Charite devices were implanted worldwide. 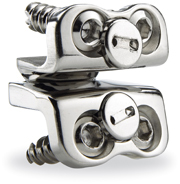 Cervical devices were more difficult to develop than lumbar devices because of the smaller size required.  The first successful cervical disc replacement to be widely used was the Prestige.  Although it was developed and used as far back as 2003 and 2004, it did not receive approval by the U.S. Food and Drug Administration until 2007.

Other disc replacement implants were developed, including the ProDisc (lumbar and cervical), Maverick (lumbar), Active-L (lumbar), and Mobi-C (cervical).  As of the writing of this book, the ProDisc and Activ-L have received U.S. FDA approval, but only for single-level use.  The Mobi-C, and more recently the Prestige LP, have been approved for two-level use under limited conditions.  The Charite Disc is no longer supported by its manufacturer.  The Maverick was apparently barred from the U.S. market (at least initially) over patent infringement issues.  Other devices continued to be developed. 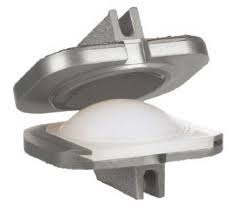 This device is a “ball and socket” device, much like an artificial hip is a ball and socket.  One piece containing a metal endplate and plastic ball is attached to one vertebra, and the other piece containing a metal concave end plate socket is attached to the other vertebra. The two halves are not physically attached to each other but rely instead on the pressure of the spine and surrounding tissues to keep the two parts in contact.  The ProDisc has been used for more than ten years.  This device was not approved by the FDA for use in the U.S. until 2006, and then only for single-level use.

Currently, in the U.S., the most commonly used device is the Pro Disc, which is approved for single-level use only.  For a time, the Pro Disc was one of the best artificial discs available.  But it has not aged well, so to speak.  In fact, by the time the Pro Disc was approved for use in the U.S. by the Food and Drug Administration (FDA), it was already considered obsolete in Germany and other countries where disc replacement is frequently performed.  Ongoing studies of the Pro Disc show a higher than necessary complication rate along with concerns for facet arthrosis.  Unlike the M6 device, which mimics the normal, limited motion of a natural disc, the Pro Disc allows more than normal motion.  This is one of those times when more is not better.  The resulting hypermobility increases the stresses on the facets (portions of the vertebrae above and below the artificial disc).  Over time, this can cause damage.

The Pro Disc has also had a rough track record when it comes to the need for revision surgery.  In fact, studies have shown that the device has required as much as 8.7% of the patients to have a second surgery within two to three years (Siepe, Mayer, Wiechert, & Korge, 2006).  Yet the ProDisc is still used for single-level disc replacement in the U.S. and Canada. 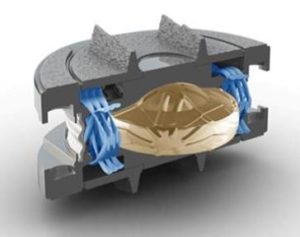 At this time, we have installed thousands of the M6 devices. In fact, as of this writing, we have installed over 2,400 lumbar implants and more than 2,600 cervical implants. We have had excellent results with extremely low complication rates across the board.

Together, the M6’s artificial disc nucleus and annulus provide compressive capabilities along with a controlled range of natural motion in all 6 degrees of freedom along each vertebra.

This “natural” motion is designed to provide the freedom and stability you need to move  naturally.

The M6 disc replacement has two titanium outer plates with keels for anchoring the disc into the bone of the vertebral body. These outer plates are coated with a titanium plasma spray that promotes bone growth into the metal plates, providing long term fixation and stability of the disc in the bone.

The Disc Replacement Book – A Back in Motion

The Evolution of Disc Replacement

Stenum and Back – My Disc Replacement Story – 2003