The ESP disc replacement is made of 2 titanium alloy end-plates and an elasto-meric cushion. The spikes on the end-plates outer surfaces improve primary fixation. The combination of a hydroxyapatite (HA) coating on top of a T40 rough surface are considered as one of the best existing coating. The titanium alloy used for the end plates allows clear medical imaging and guarantees good bony fixation over time.

Origin of the ESP Disc Replacement

Concept of a “Silent Block” ESP®

The development of the ESP disc range originally came from Professor Roy Camille, from La Pitié Salpétrière Teaching Hospital in Paris (France). After inventing the pedicle screw which became the gold standard for Spine fusions, Pr. Roy Camille started to work on analysing the natural disc properties and designed a prosthesis to restore these.

Both CP-ESP and LP-ESP  belong to the 3rd generation of disc replacements. Their specific mono-bloc design resulting from over a decade development allows them mimic the properties of natural discs. They provide movements in all directions without any friction and without any risks of debris production nor dislocation. 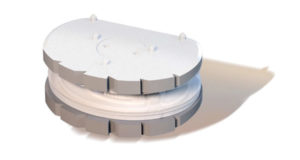 The LP-ESP cervical disc replacement has been developed to mimic the natural lumbar disc and allow the spine to behave as if the replaced disc would be natural in all situations. 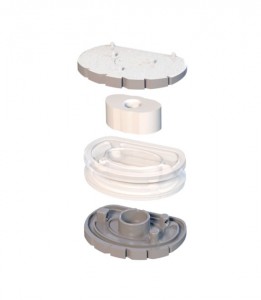 The CP-ESP cervical disc prosthesis has been developped to mimic the natural cervical disc and allow the spine to behave as if the replaced disc would be natural in all situations.

To report 5 years clinical and radiographic outcomes, range of motion (ROM), and position of the center of rotation after a viscoelastic lumbar TDR.

The clinical evaluation was based on visual analog scale (VAS) for pain, Oswestry disability index (ODI) score, short form-36 (SF-36) including the physical component summary (PCS) and the mental component summary (MCS), and general health questionnaire-28 (GHQ28). The radiological outcomes were ROM and position of the center of rotation at the index and the adjacent levels and the adjacent disc height changes.

Our study group included 61 consecutive patients with monosegmental disc replacement. We selected patients who could provide a global lumbar spine mobility analysis (intermediate functional activity according to the Baecke score). Hybrid constructs had been excluded. Only the cases with complete clinical and radiological follow-up at 3, 6, 12, 24, and 60 months were included.

This series reports significant improvement in midterm follow-up after TDR, which is consistent with previously published studies but with a lower rate of revision surgery and no adjacent level disease pathologies. The radiographic assessment of the patients demonstrated the quality of functional reconstruction of the lumbar spine after LP-ESP viscoelastic disc replacement.