Patients in the investigational device exemption (IDE) study also used less pain and opioid medication when compared with anterior cervical discectomy and fusion (ACDF) patients, and 92% reported they were satisfied with the surgery, the Lewisville, Texas-based business said in a prepared statement.

At 24 months, patients in the ACDF group who were still using pain medications had a seven times higher rate of opioid use than those in the M6-C disc group, the study showed. In the M6-C group, 92% reported that were satisfied with the surgery.

“The results from the M6 Disc Replacement IDE clinical study continue to validate the positive outcomes of cervical disc arthroplasty versus discectomy with fusion,” said Dr. Jack Zigler, an orthopedic spine surgeon and an investigator in the study. “A significant reduction in pain, the maintenance or improvement of neurological function, and the preservation of natural disc motion after 24 months were all meaningful clinical benefits the M6-C disc patients experienced when compared to the fusion control.”

Zigler presented the study results during the International Society for the Advancement of Spine Surgery (ISASS) annual meeting in Anaheim, Calif.

A prospective, non-randomized, concurrently controlled clinical trial, the M6-C IDE study was conducted at 23 U.S. sites with an average patient age of 44 years. The study evaluated the safety and effectiveness of the M6-C artificial cervical disc compared to ACDF for the treatment of single-level symptomatic cervical radiculopathy with or without cord compression. The overall success rate for the protocol-specified primary endpoint for the M6-C disc patients was 86.8% at 24 months and 79.3% in the control group. This data statistically demonstrate that cervical disc replacement with the M6-C disc is not inferior to treatment with ACDF.

The M6-C artificial cervical disc is made of ultra-high molecular weight polyethylene fiber wrapped in a specific pattern, with multiple redundant layers that create a fiber matrix (artificial annulus). The fiber is then wound around a polycarbonate urethane polymer core creating an artificial nucleus. Like a natural disc, this unique construct allows for shock absorption at the implanted level, as well as provides a controlled range of motion when the spine transitions in its combined complex movements, according to the company.

“With the recent FDA approval of the M6-C artificial cervical disc, we are excited to be able to provide spine surgeons and their patients a new and innovative alternative to the ball-and-socket artificial disc designs currently available in the U.S.,” said global president of Orthofix Spine Brad Niemann in a prepared statement. “What makes the M6-C disc so unique is its physiologic single-piece design featuring an artificial nucleus and annulus that work together to mimic the biomechanical motion of a natural disc to include axial compression or shock absorption, which no other disc available in the U.S. has to offer.”

Orthofix said it will release the M6-C disc replacement in 2019 through a controlled, limited market launch in the U.S. accompanied by an extensive training and education curriculum for surgeons. The device CE Mark approval for distribution in the E.U. and other countries in 2006; there have been more than 45,000 implants of the M6-C artificial cervical disc outside of the U.S. to date. 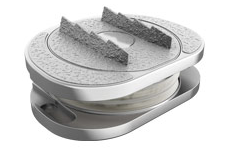